It’s been a while since I’ve done this.

What to do
Mash the banana with a fork (or mixer if you want). Add egg and flour. Stir until you have a smooth batter.
Heat a pan and grease with a bit of butter. Pour the batter and wait for bubbles to show, then turn the pancakes. Bake until golden. 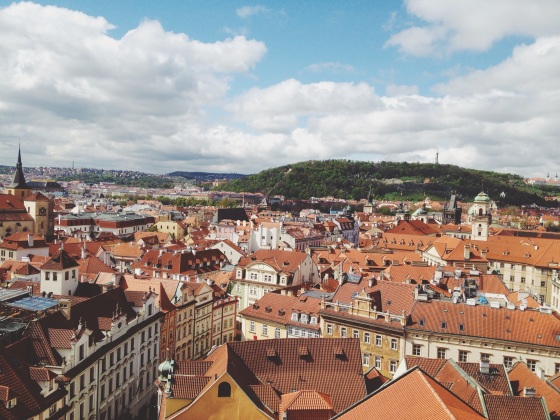 A trip to Prague has been months in the planning and always got postponed. I was busy with University. Christmas madness was taking up all my time. The weather in February just really isn’t all that great. I guess you can see where this is heading…

A couple of weeks ago I sat down with a friend over breakfast, switched on our laptops and started getting down to business. Within half an hour we had our bus tickets booked and found a great hostel for two nights situated smack in the city centre.
That wasn’t so hard now, was it?

A four-hour bus drive (return tickets) and two nights in this great hostel (breakfast included!) added up to less than 100€ per person. Isn’t Europe great? Don’t you just love it?

A four-hour bus drive takes you in a completely different city, with different customs, traditions, language and history. I’m prone to taking it for granted but isn’t it the most mind-blowing thing?
In the case of Prague I found myself constantly comparing it to Vienna. And to a certain extent the cities really are incredibly similar as they have shared quite some time in the same empire. The local food was very similar to dishes that we consider “local” here as well as the food I ate in Budapest – again, a reminder of how long and interwoven the history of these countries are.

Prague itself is a stunning place. I cannot say this often enough. The old town has been virtually left undestroyed by war of the communist era, houses are not run down but beautifully restored and preserved and people speak – at least that was my impression – sufficient to really good English. I also realised that I love listening to Czech.

The weather has been great the weeks leading up to our three-day stay in Prague but the second we were on the bus it was cold, rainy, windy and all around awful. (Our first stop was to a local H&M to buy a thicker sweater, I kid you not! Don’t let the pictures that follow fool you, it really was awfully cold!)

Three days in Prague were a good amount of time to spend there. Though, we were already struggling to find things to do on our last day it was still nice not having to stress about all the sights we still had to see and be able to leisurely walk from café to café all day.

Here some observations I made during those three days: 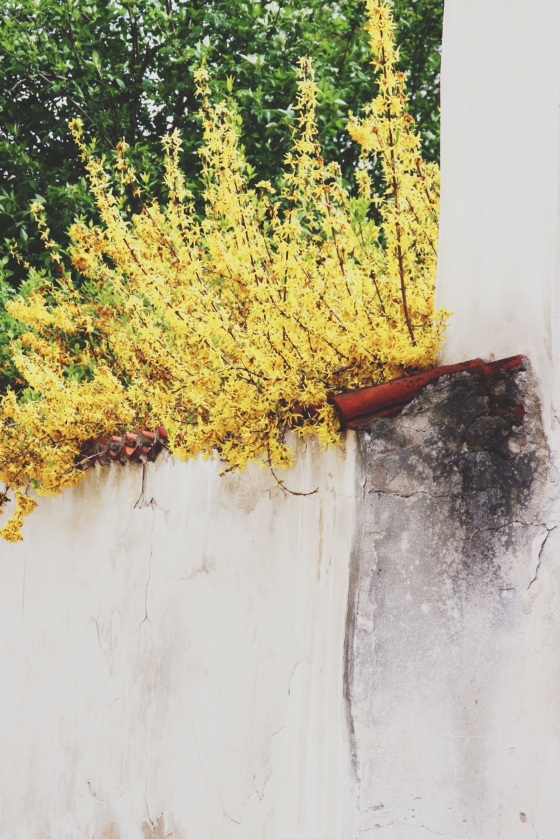 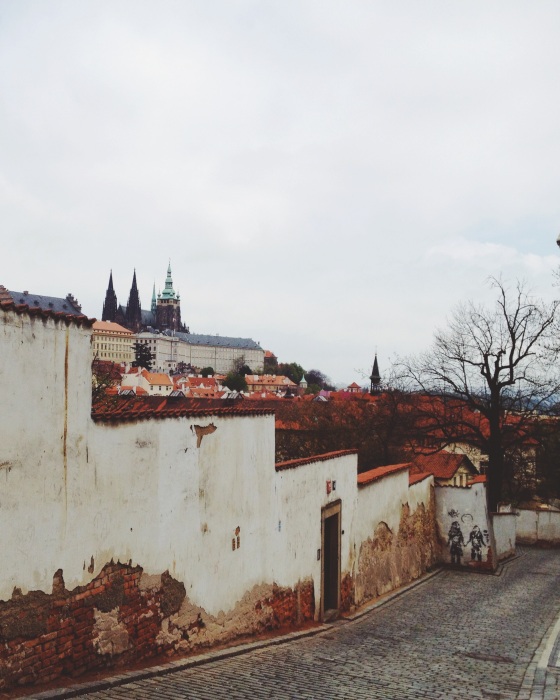 Going up to the clock tower really isn’t strenuous at all (no steps and even an elevator !) and the view over the city is spectacular!

I’m not sure if this is due to my complete lack of orientation or if the Czech street signs are out to get me but I constantly got lost. I swear. We got lost all the time. I love it because it often gives you the chance to discover places you otherwise wouldn’t but after three days of walking huge detours my feet started protesting. 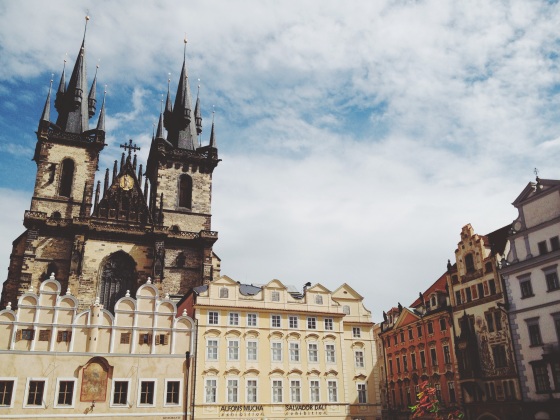 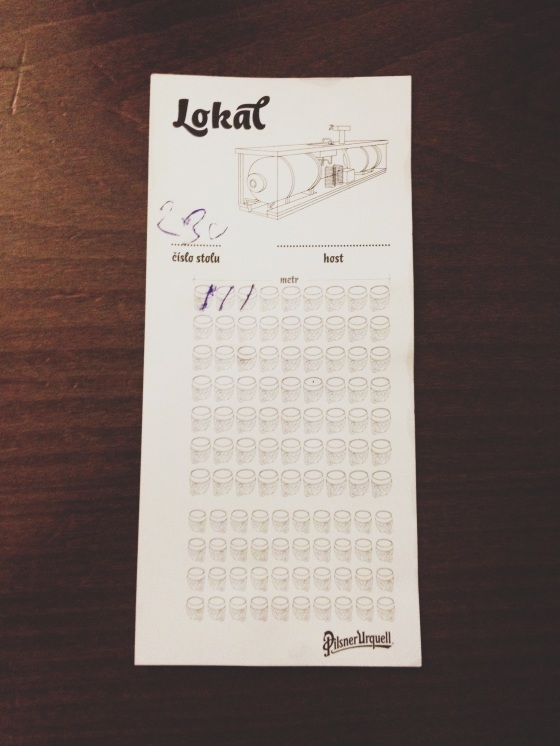 Café Savoy is a Viennese-style café and the savoy cake is absolutely mouth-watering.

Prague has a multitude of cafés and restaurants. From french bistro’s to typically czech pubs, it’s all there and you definitely won’t go hungry in Prague.

You don’t necessarily need to buy tickets to get a good impression of Prague Castle. Most of the sights are open for the public and you only need the ticket if you want to go to the back of the church or further in the chapel. In fact, had we known this before, we probably wouldn’t have bought the tickets.
The change of the guards at 12pm is a more elaborate spectacle with modern fanfare and quite a tourist attraction. We watched around half of it and then snuck away to buy the tickets because we thought we’d be able to avoid a long queue. We were right and it was a great decision!

Prague has a jewish part of town which used to be the jewish ghetto. Today you can visit these synagogues as well as the old jewish cemetery. Some of the synagogues are a memorial for the jews killed during the holocaust and very beautifully renovated. 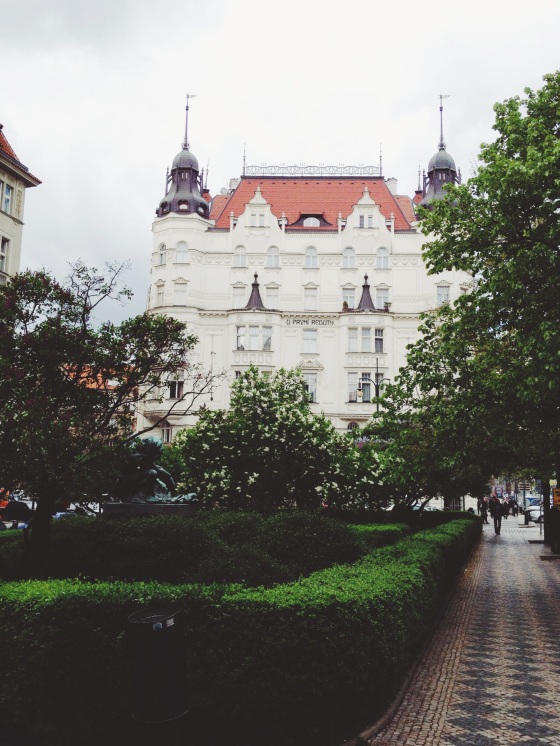 In the middle of the Old Town Square was a huge Easter Market with a lot of traditional as well as international snacks. Get a “Trdelnik”, it’s super tasty (again, this is also something they sell in Hungary!). 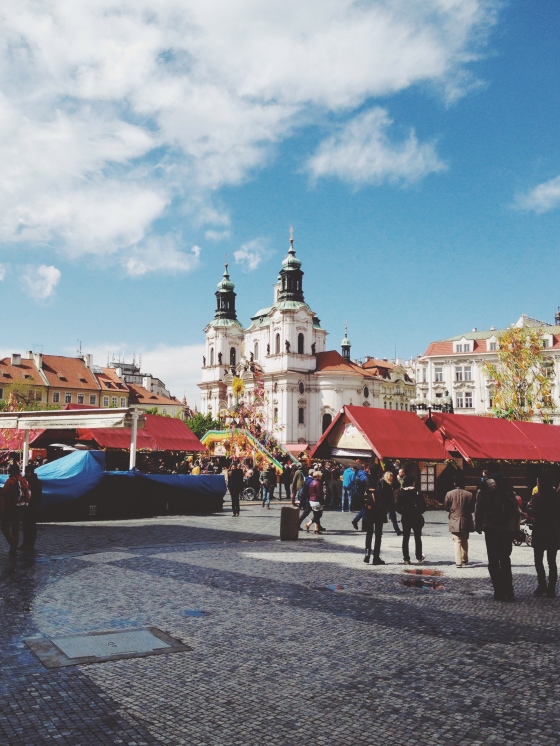 Prague is definitely one of the most stunning and maybe even underrated cities I’ve been to, so far. It’s been a lot of fun, until next time, I’m sure.
These pictures can all also be found on my Instagram. I constantly post on there, it’s an obsession. So come say hi? 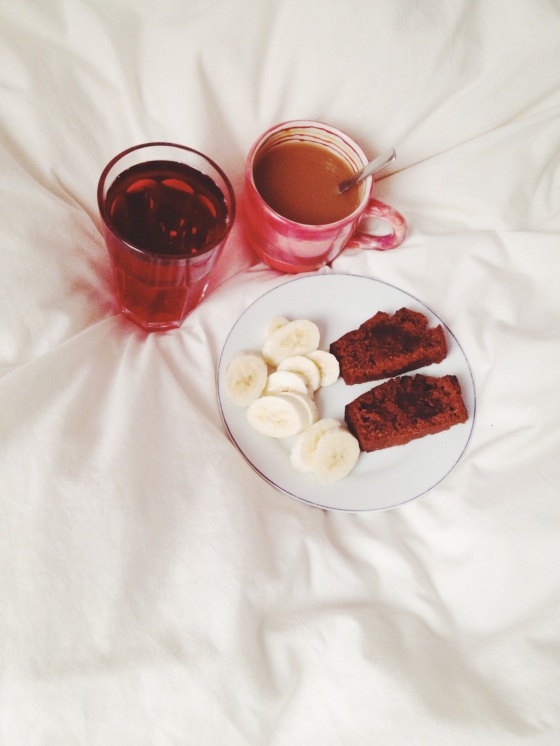 / Homemade chocolate cake.
/ 1 banana.
/ Pomegranate juice with a bit of tap water.
/ Pg Tips with just a tad of milk.

/ Zwetschkenkuchen (Plum Cake).
/ PG tips with just a bit of milk.
/ Orange juice with a bit of tap water. 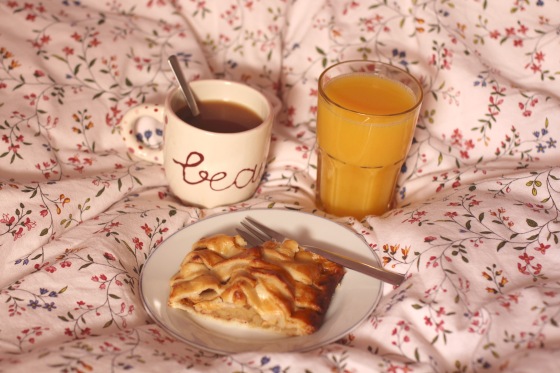 / Apfelkuchen (Apple Pie).
/ PG tips with just a bit of milk.
/ Orange juice with a bit of tap water.